Speaking the Same Language at INTA’s March Conference: The Business of Brands 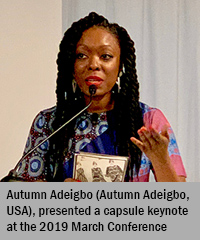 There were also cautionary tales of proposed U.S. privacy regulations and the extra-territorial reach of the European Union’s General Data Protection Regulation from Linda Goldstein, Partner, BakerHostetler, USA, and Heidi Wachs, Vice President, Stroz , USA. David Haigh, Founder and CEO, Brand Finance, UK, stated that brands are a big part of intangible assets that make up 52 percent of the average value of a and that brands is “valuing an expectation of the future.” Todd Grossman, CEO-Americas, Talkwalker, Inc., USA, used future-speak terms like “social listening,” “share of voice,” and “content ideation” when describing how companies use artificial intelligence to measure emotional responses to their brands. Jeff Peters, Vice President, Licensing and Retail at HBO, raised the notion of today’s social media “culture of outrage” as a less-than-effective tool for interdepartmental . Panelists agreed that enforcing brand rights has evolved from a private matter between businesses and to a scenario in which the whole world seems to be watching and commenting.

This point was aptly illustrated by Miles Ritenour, Communications Manager of Anheuser-Busch InBev, USA. Mr. Ritenour explained that the company’s “Dilly Dilly” ad campaign was enthusiastically embraced by the public, garnering more Google searches than Beyoncé. But when a Minneapolis brewing company adopted “Dilly Dilly” as the name of their new IPA, Anheuser-Busch InBev decided it needed to protect its rights without “looking like the big bad beer giant.” So Mr. Ritenour and his legal team crafted a cease and desist order in Old English, mimicking the medieval theme of the ad campaign. A “town crier” visited the brewery and announced their (light-hearted) demands from a scroll.

Mr. Ritenour said he was inspired by Bryce Coughlin, Senior Counsel of Netflix, USA, whose now legendary cease and desist letter was sent in the language of the Netflix show Stranger Things to an unauthorized Chicago pop-up bar. Mr. Coughlin, who shared a panel with Mr. Ritenour and Andrea Anderson, Partner, Holland & Hart, USA, posed the question faced by in-house legal teams: “when do we care?” He suggested it was important to move the conversation from “what we can do” to “what we should do.” Ms. Anderson added that as outside counsel, dealing with “outrage” from a company to unauthorized use of their brand usually involves a lot of work in a compressed time, “not an atmosphere conducive to thoughtfulness.” Another topic discussed across the two days of the conference was how to manage legal issues versus business risks. “We used to be known as the ‘floor of no,’ said Cathy Lueders, Assistant General Counsel and Senior VP of MasterCard, USA. Rana Kardestuncer, Founder, January Communications, USA, said that, in her “former life,” marketing lived between “pushing the envelope and getting sued,” and that the mandate was “if legal says no, ignore them.” Ms. Lueders added, “business is the first line of defense, legal is the second line” and noted that it may be necessary to escalate “above junior-level execs who are sometimes only looking at the numbers.” Both Ms. Lueders and Ms. Kardestuncer agreed that core company values should always guide decisions on risk.

The business-centric approach to issues followed through in the discussion of more traditional legal topics, such as the tax implications of IP transactions and ethics. Both Marc E. Berg of Feingold & Alpert, USA, and Larry Cohen of Cohen Law Firm, USA, respectively, provided a wealth of information with humor and passion.

Jennifer Leemann, Vice President, Internal Communications, Tapestry, USA, told the story of the evolution of Tapestry, in which “Coach” moved from being the company name of a stand-alone brand to being a brand within a “house of brands,” and Regina Thomas of Verizon, USA, described her experience of the transition from AOL, AOL and Yahoo, to Oath, and now Verizon Media. Both Ms. Leeman and Ms. Thomas shared their journeys to new corporate names and Ms. Leeman acknowledged that her company’s transition was relatively smooth compared to many companies attempting to negotiate similar changes. New to the conference this year were presentations by capsule keynote speakers, including Bess Freedman, CEO of Brown Harris Stevens, USA, who discussed New York City real estate; Nancy Jeffrey, Editorial Director, Edelman, USA, who stressed the importance of brand stories and how “brands need to be their own storytellers”; Autumn Adeigbo, Founder and CEO, Autumn Adeigbo, USA, who talked about ethical and sustainable “by a heart-driven leader”; and Derek K. Rapp, President and CEO, JDRF, USA, who spoke about the potential transformative power of the “mission-oriented” organization. These focused presentations drove home the idea that trademarks represent passion, corporate social responsibility, innovation, and transformation-reminding legal professionals that lawyers not only protect but also serve as their ambassadors.

In a lively address, featured keynote Stuart Weitzman explained how he built the brand for the eponymous shoe company by inventing creative solutions to business roadblocks. Mr. Weitzman noted that thinking outside the box becomes more natural with and that innovative direction can come from unlikely sources if we pay attention. His talk-peppered with anecdotes, photographs, film clips, and a replica of the diamond-encrusted sandals worn by actress Laura Harring at the 2002 Oscars-drew a standing ovation from the crowd.

Overall, this year’s New York City conference highlighted the importance of members of the business and legal professions looking at issues from a different perspective, speaking the same language to build mutual trust in meeting business demands, enhancing consumer protection, and embracing change and innovation.